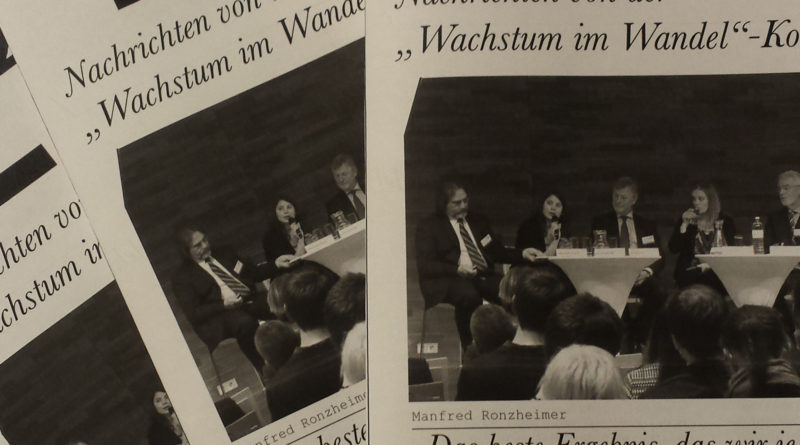 Looking back at the Growth in Transition Conference 2016

(cooppa, Manfred Ronzheimer, 07.09.2018) The “Growth in Transition” initiative is over ten years old – launched by the (then) Austrian Federal Ministry of Agriculture, Forestry, Environment and Water Management and supported by more than 25 partner organisations with a connection to sustainability, including ministries, provincial governments, interest groups, businesses, universities and civil society organisations. The highlight of the network’s work are the international  “Growth in Transition” conferences, three of which have taken place so far (2010, 2012 and 2016). The most recent conference titled “How Constraints Make Us Grow. Society in Transition” was held at the Vienna University of Economics and Business (WU) from 22 to 24 February 2016 with around 600 participants.

Diversity of topics and experts for the transformation society

Several plenary sessions and 29 working groups reflected on the “transformation society” to be aimed for and the way get there. Prominent speakers included Andrä Rupprechter, then Austrian Federal Minister for Agriculture and the Environment, Janez Potocnik, former EU Commissioner for the Environment, Tim Jackson, British economist and growth critic, and Hans Herren, world agricultural expert and winner of the Alternative Nobel Prize. Two evening events with a broad discussion panel dealt with the consequences of the Paris Climate Summit under the title “The Decision for Transformation” and the current transnational refugee and migration movements (“Migration – Movement of People”).

Like this year’s conference, the event provided an opportunity to put the possibilities of “transformation journalism” into practice. The presentations and discussions were reported journalistically by and on the website of German-language online magazine N21 as well as on the conference blog. Additional “editors” were the participants of a workshop on transformation journalism held at the University during the conference. The highlight was the production of two printed conference newspapers, which were presented to the participants on two mornings of the event. Similarly, reporting on this year’s confernce will be published right here on the blog (in English) as well as on cooppa.at (in German).

The following gives an overview of some of the reporting on the conference in 2016 and allows for reflection on what might or might not have changed since:

The role of work in the sustainability debate
At the conference, Sigrid Stagl, Head of the Institute for Ecological Economics at WU, spoke out in favour of a broad discussion on “sustainable work”. She asked: How should work be conceived in connection with growth in a sustainable environment? A solution could be the distribution of labour.

“The best result we’ve ever had.”
Panel discussion on the importance of the Paris climate summit “Paris was a sensation, a fantastic result”, said Helmut Hojesky, head of the climate protection department at the Ministry of the Environment, in commenting on the outcome of the UN climate conference COP21 held in Paris last December. “That was the best result we’ve ever had”.

Are we facing “secular stagnation”?
Angelika Zahrnt, who among other things edited a book on a “Post Growth Society” (“Postwachstumsgesellschaft”) together with Irmi Seidl, explained the concepts of growth and stagnation in a workshop on “Secular Stagnation” organised jointly by research institute SERI and the Austrian Chapter of the Club of Rome. The hypothesis of a long-lasting weak growth dates back to the 1930s.

Great challenges, but also opportunities for Europe
Karl Aiginger, then head of the Austrian Institute of Economic Research (WIFO), revealed result of the European www4europe project (www.foreurope.eu) coordinated by him. Its core: a new (growth) path for Europe should become more social, dynamic and ecological.

Migration moves people and minds
The hottest topic of current politics in Europe, the management of the refugee crisis, also provided the occasion for an exciting discussion on the second evening of the conference titled “Migration – Movement of People”.

Scenarios for the Future
Jill Jäger and Henning Wilts presented the EU project POLFREE ( Policy Options for a Resource Efficient Economy) in the session “Scenarios for Europe using much less resources”. In it, three different ideal-typical ways toward a resource-efficient future were outlined.

Energy transition: where to and how?
The transformation of the energy system  is the central project of the coming decade and an important prerequisite for a sustainable economy and society. There are two solutions to this problem: Some focus on technical progress and think of large-scale solutions – ideas range from smart grids to CO2 capture and nuclear fusion.
Others consider these technologies to be too expensive and difficult or too late to implement, and regard individual action as the primary success factor: only if we change our way of life and our economic system can we create the energy transition.

Sustainable old-age provision
The future of the pension system in Austria was to be negotated at ministerial level shortly after the event. At the conference workshop Ulrich Schuh (Eco Austria) and Peter Grafeneder (BMF) gave insights into the relevant topics.