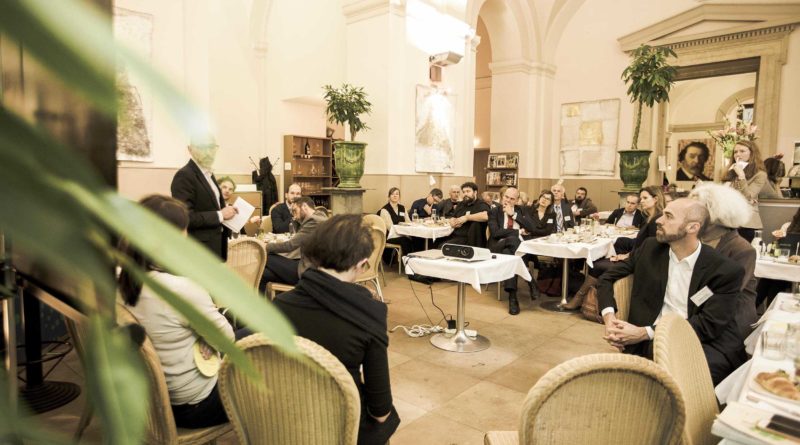 (cooppa, 12.04.2019, Katy Shields) In late March, Vienna welcomed the Ellen MacArthur Foundation and its vision for a circular economy to the city. First stop on a whirlwind tour that included meetings with representatives of the repair sector, education and the city government was a “CEO Breakfast”. Held below the stock exchange, the event, hosted by the Austrian Business Council for Sustainable Development (respACT), brought together entrepreneurs, NGOs and various experts to learn about and debate how the circular economy could benefit their city and country.

Executive Director Joss Bleriot started his presentation with a brief history of the foundation, which was set up in 2010 by Dame Ellen MacArthur, solo round-the-world sailing champion and environmentalist. He explained that it was during those long stretches of time aboard a small yacht, making do with very limited resources, where she realised that our models on land are not only incredibly wasteful, but involve, albeit on a different scale, similar resource constraints. So she launched a foundation to promote a circular economy in which nothing is wasted, resources are continually cycled through the economy and pollution is reduced to a minimum.

The concept of a circular economy is not strictly new. Various forms have been proposed before, such as by the Club of Rome in The Limits to Growth, Walter Stahel’s Performance Economy and Friedrich Schmidt-Bleek’s Factor 10.
Bleriot described their own vision as a “reset of all systems,” resting on three pillars:

Importantly, for EMF, the circular economy is about both progress and growth. To make that point, they recruited McKinsey (who as Bleriot pointed out are hardly “left-leaning hippies”), to crunch the numbers. Their results pointed to huge potential. For example, they found that increasing by just one cycle the life of “medium-lived products” (like washing machines, cars and other equipment) could bank European businesses and economies an extra $630bn.

It was at that point, according to Bleriot, that businesses started to take note. In an open letter to Jean-Claude Juncker, CEOs of various major companies urged for the circular economy to be part of the new resource-efficient Europe strategy. This, he says, helped pave the way for the Circular Economy Action Plan in 2015.

The focus on business is part of the foundation’s emphasis that “pre-competitive” collaboration is needed to accelerate progress (especially where policies may be lacking). A first target was plastic waste. One of its most famous statistics is a forecast that, by 2050, there will be more plastic in the ocean than fish. This helped to catalyse a global commitment on plastics, now signed by 350 businesses worldwide and representing 20% of all single-use plastics, who agree to commit to making their packaging either fully recyclable, recycled or biodegradable by 2025 (this is compared to an EU target of 2030).

From oceans and fields to city streets…

Now the foundation is aiming to make similar progress in other areas, such as textiles, and – a key focus of this workshop – in cities.

“Cities aggregate stuff,” notes Bleriot. “Resources flow from the field to the city… but then nothing comes back.”

So over the past few years the foundation has been working with 20 cities around the world to help implement circular strategies. According to Miranda Schnitger, EMF’s Cities Project Lead, with 75% of the world’s population and generating up to 80% of emissions and 50% of all waste, there is much that cities can do.

For example, their research found that 60% of office space often sits empty and just one in every five car seats is typically in use on each journey. Meanwhile, 20% of municipal budgets are spent on waste management yet 75% of products that end up incinerated or in landfill do so mainly because of poor design (i.e. they cannot be repaired or recycled).

Schnitger presented some of the innovative solutions among the cities they have studied. These include London’s Library of Things, which aims to tackle overconsumption and product obsolescence by enabling members to borrow from a trove of high quality tools and household items. Open Desk, another London-based initiative, is a global platform connecting designers to “makers”, who can download and print designs locally, saving transport costs and emissions as well as supporting local jobs. City administrations are also supporting circular businesses via procurement. San Francisco, for example, now requires Cradle to Cradle standard for flooring in city-funded construction projects. And in education, Belo Horizonte is tackling electronic waste and boosting local skills by offering free courses in computer repair and refurbishment. (A suite of case studies can be accessed here).

So how is Vienna – and Austria – doing?

Well, that depends on who you speak to – and perhaps more importantly, how you define the circular economy. Nothing seems to irk circular economy practitioners more than being seen as synonymous with the waste management and recycling industries. Yet this is often how the circular economy is viewed in Austria says Julika Dittrich, head of Circular Futures, an initiative led by the Umweltdachverband representing more than 200 organisations in Austria (and also, co-host of the respACT event). “There is still some complacency,” says Dittrich, who notes that stakeholders often point to Austria’s high recycling statistics as evidence that “we already have a circular economy.”

While Austria indeed has some of the best recycling rates in Europe (and globally), it still consumes far too many resources. Its ecological footprint – all the land, biomass, metals and minerals it consumes at home and via its imports – is three times the “carrying capacity” of the earth (the rate at which resources can replenish as well as the available sinks for absorbing pollution).

Dittrich points out, as EMF did in their own presentation, that for the circular economy to work, cities and governments both need to be on board. Without a clear strategy, business won’t act. Yet governments alone cannot implement the many changes required. As an example she points to the recent EU Plastics Strategy. “We’ve had an interesting trial with plastics. Industry was forced to act. This has caused businesses to rethink the entire business model. Now, we have to bring it to other areas.”

Moving beyond plastics is a key challenge if the momentum of the latest incarnation of the circular economy is to be sustained. Plastics are just one part of the problem while switching to other materials may not necessarily reduce environmental strains, and could even create others. As one event participant asked, how do we ensure the circular economy is also sustainable?

And while Austria may be ahead in recycling, other EU countries are making faster strides towards creating circular economies – Finland, the Netherlands, Scotland and Slovenia have already drawn up circular strategies while Germany has just kicked off its own initiative. However, Dittrich says opinions here are now changing and that the theme is gaining traction in Austria and Vienna especially (the next Smart City strategy is expected to include a circular economy component).

Judging by the growing interest in the topic – this is the third circular economy-themed event this reporter has visited in Vienna in as many months – there is no shortage of businesses, entrepreneurs, scientists, NGOs and others, with the knowledge, skills and energy to rise to the challenge. Whether they can succeed is another question, but having the right strategy in place can only help.

One thought on “The circular economy comes to Vienna”